We are open Tuesday to Saturday, due to Social Distancing please book in an appointment here.

A love of jewellery for generations

It’s been a 60-year love story. A story of a family manufacturing and transforming diamond engagement rings for half a century, marking happy moments. It’s the 60-year success story of Andrew Mazzone Design Jeweller.

Following in his father’s footsteps, jewellery found a place in Andrew’s heart as a teenager. After completing a 4-year apprenticeship alongside his father Quinton, he then studied a Bachelor of Jewellery Design at the University of South Australia. 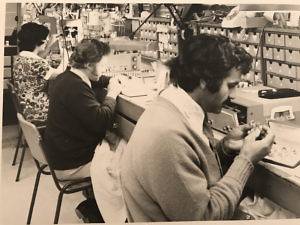 The first ‘Mazzone’ store was opened by Andrew’s father  Quinto  in Glynde, (which has since changed hands). The family then moved to their centrally based Adelaide, Pulteney Street store in 1984. The second-generation jeweller in the family, Andrew, made his own mark in the jewellery industry, rebranding the store and taking the Mazzone name to the next level. Specialising in custom-made engagement rings and unique jewellery pieces became his forte.

It was a move that allowed Andrew and his team to focus on their clients with a new contemporary approach. Although Andrew enjoyed his apprenticeship and was named ‘Adelaide’s Best Jeweller of The Year’ in 2011 by The Advertiser, Andrew doesn’t chase awards. He feels that recognition from the industry and his clients is his greatest accolade.

We would be more than happy to recommend Andrew Mazzone Design Jewellers to any number of our friends and family looking for an excellent customer experience and beautiful custom jewellery.

or click the relevant link below to submit an enquiry online.

Due to social distancing please book an appointment when coming into our store. Thank you.